I love our website provider (PopMenu - look it up, they're a little spendy, but awesome if you're a brewery + full service restaurant [no, this blog isn't sponsored, I just actually like them]), but I can't say that they have the best Blog features. Their "Blog Settings" tab in the background is a button that, once clicked on, has one field that you can edit. And that is Blog Title.

Anyhow, this post is going to be photo heavy, and I know it looks gross as presented on the blog, but bear with me because the content in the photos is pretty rad.

Like I mentioned in the last post, one of our measurements of success during this crazy time is going to be whether or not we used the time to make ourselves better. In keeping with this, we've been working through a list of projects that we've been meaning to do for a while now (and some new ones that seem like good ideas) with the extra time and human power that we have at our disposal.

One of those projects has been refinishing and raising our bar. Our bar height has been non-standard since the beginning which was fine for a time because we had custom stools built out of rebar and wood. Those stools didn't have backs, though, and were starting to give up the ghost, so it was time to swap them out for new and improved ones. Our bar was also in need of a refinishing, so we figured now would be the perfect time to tackle both tasks.

Here's a before shot: 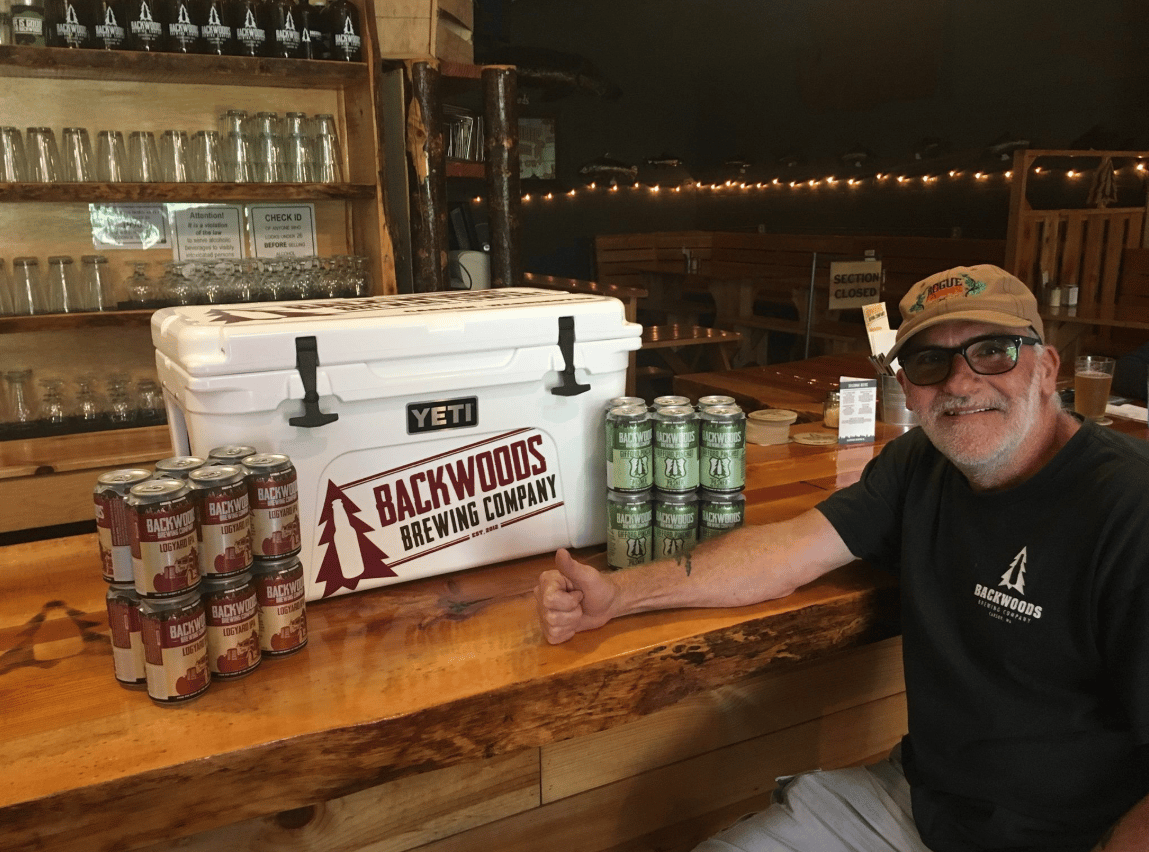 Believe it or not, this is the most complete picture of the bar I could find prior to redoing it. But it's also a pretty sweet picture of Pa Dale (one of our brew team), so I'm good with it. If you wanted real official looking before and after shots you'd be on HGTV's blog, not ours...

First task was removal. We like to keep things graceful here at Backwoods, so naturally we went with the nuanced solution of prying it off the supports and lifting it out with a forklift: 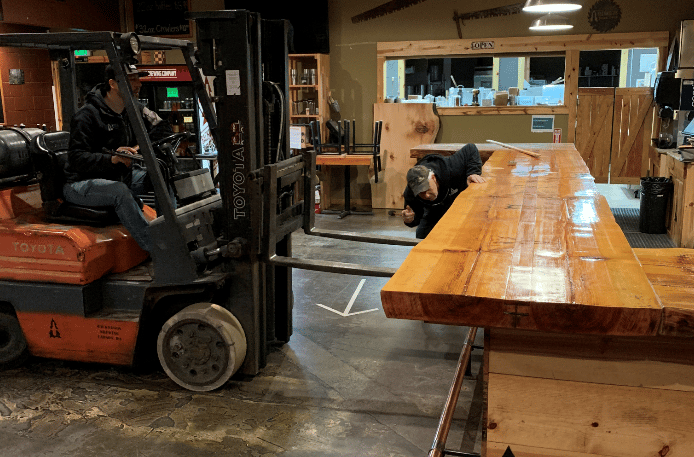 Next up, we loaded all of the bar pieces into a truck and took it over to our neighbor/friend/woodworker's house for some sanding and to give it a black walnut inlay down the middle. 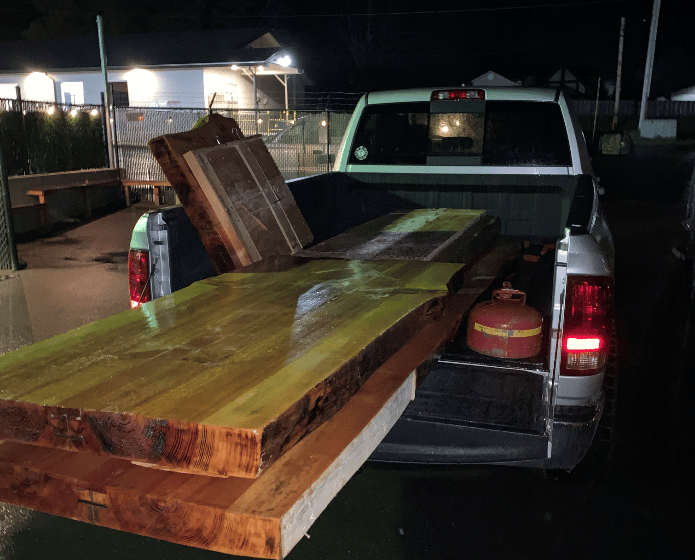 While it was over there, we added an extra layer of 2x6s to the bar support to get it to the height that we wanted.

Once it came back to the pub, it looked a little something like this: 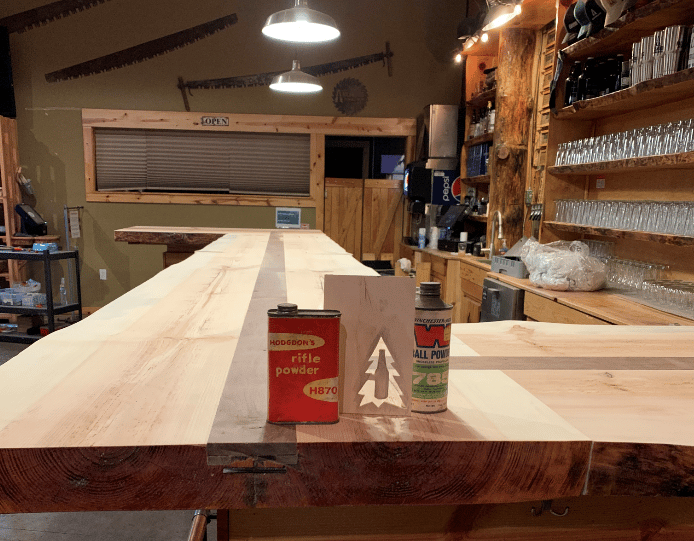 Oh, and those "ingredients" sitting on top of the unfinished bar? Those were for the next phase in our plan. We had to get the logo back onto the bar, and there may be better and easier ways of doing it, but I don't think anyone will argue that the funnest way to do it is to set up a bunch of logo patterns all over the bar with gun powder and light it on fire all at once, which is what we did. 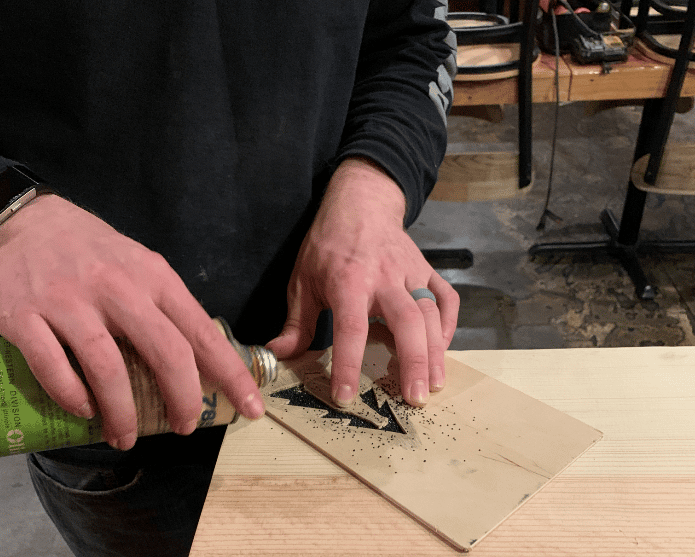 (Mark Miller as he always is: taking his time, getting it right.)

After this was done (we have video of the fire but not pictures, unfortunately). We applied four coats of epoxy resin so that we would NEVER ever ever ever have to refinish this bar again. And also to give it that extra glossy sheen that only epoxy can provide. 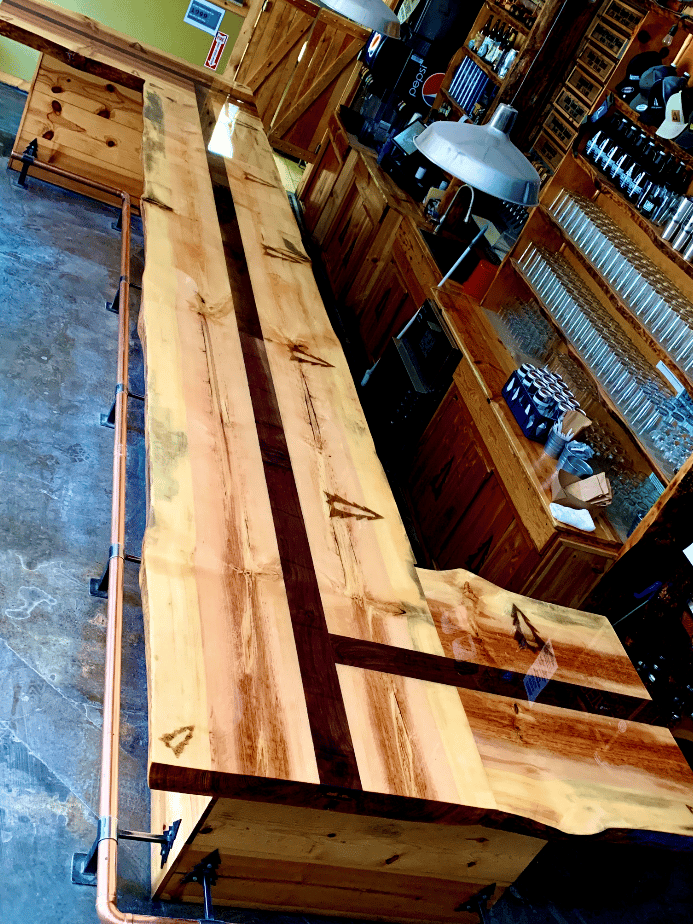 And there you have it! A raised, improved, and refinished bar. Epoxy resin isn't cheap but it's not terrible compared to hiring out refinishing work. And we got a deal on the walnut, so that was nice. All in all, it was a great project for giving some of our core crew something to work on, and hopefully something that will inspire ooo's and aaaah's out of our customers when they get to come back and sit at the bar one day.

Alright, I think this has been a few too many fun posts in a row, so next time we're going to have to crank the fun knob down a notch or two. Next up, we'll be taking a look at the state of emergency funding again for us and the entire industry as we know it!