As mentioned a couple of times in the last post, our first step in figuring out how to address all of the problems coming at us was to sort out what our cash flow situation looks like when there are little to no sales coming in and little to no costs associated with those sales.

People use the term "fixed costs" like they're always there and easy to measure, when really there is a lot more nuance than you expect. Every time you grow a little, some fixed costs grow with you - every new contract you sign, every year that goes by and you add cost of living adjustments to your employees' salaries. That's why we had to take as much of an up-to-date snapshot as possible of the costs that were still going to crank even if we didn't sell a small pizza or a drop of beer. 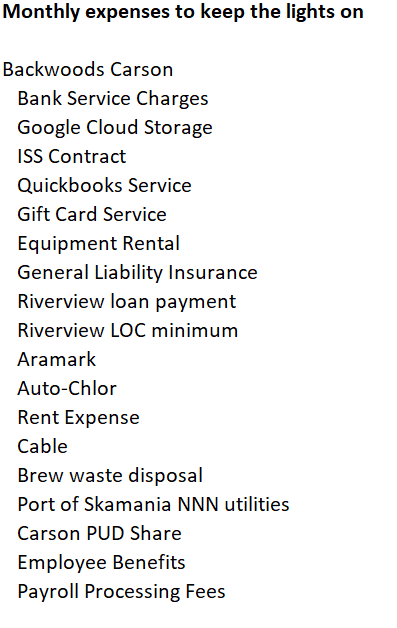 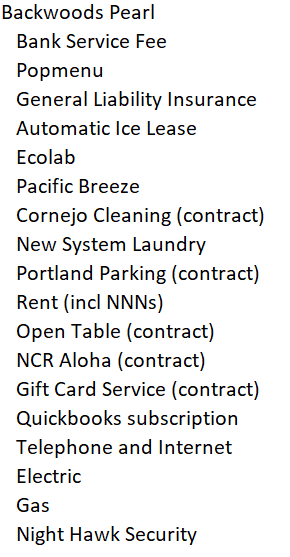 Following that, we listed out the employees that we expected to keep on the payroll after the immediate layoffs mentioned in the last post. Noting that our current payroll levels would burn through cash and available credit a little hot, we planned into the model a column for what certain levels of pay cuts would look like. Here's what the model looked like, with individual employees' rows hidden (obviously), and the totals scrubbed out, but hopefully you can follow how the math was done:

That last snapshot kind of hints at the idea that at the time we were planning for at least a three month impact.

We then combined the monthly figures in those two calculations to get to what our monthly cash burn would be in this new world, assuming no sales and no costs associated with those sales. We understood the reality that there would still likely be some sales to be had, but whatever those ended up being would effectively just be extra time available to use as cash burn while we waited for emergency funding, which was already being talked about by the SBA even before the big $2 trillion CARES bill was enacted (as I write this, that was Friday of last week).

Taking this monthly cash burn figure, we multiplied it by three (again, assuming this would have a serious negative effect on sales for three months), added an additional percentage for miscalculation buffer, and arrived at the amount that we would be seeking in emergency loan funds.

Finally, we compared that monthly cash burn figure to our cash levels, accounts receivable, and available lines of credit to make a rough calculation of how long we could survive without emergency loan funds. It would depend on how things hit and timing, but we figured we had something like 7 to 9 weeks. We're now at week 2.5. Tick tock.

That sounds dramatic - it's not really as bad as that. As mentioned before, we've actually had better brewery and takeout sales than expected, which is pushing out our timeline. On top of that, we've had concessions on several high dollar items that came out of the tough conversations that I mentioned in the last post. But I have to hype the drama to keep people reading, right?

In the end, it was a good exercise that helped the decisions that we had to make ahead look less like decisions and more like the obvious result of some tough calculations. And it set us up with some solid numbers to work with while we went out hunting for disaster relief funds.

And that is what we'll cover in the next blog post - how and where we've sought funding, and what that strategy is as of week 2.5.